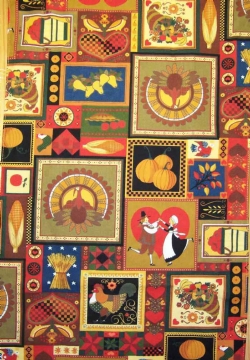 Thanksgiving Day, a national holiday imitated only by Canadians, was first established as an annual event by Abraham Lincoln in a proclamation dated 3 October 1863. Expressing hope amidst the continuing Civil War, it was a response to the campaign of Sarah Josepha Hale, editor of Godey's Lady's Book, to nationalize an autumn festival already observed by most of the states. Sporadic days of thanksgiving had been previously appointed by national leaders, such as those honoring military victories during the American Revolution, the Whiskey Rebellion, and the War of 1812 and one by George Washington to celebrate the new Constitution on 26 November 1789. The origin of the holiday is rooted in New England practices of prayer and feasting, most symbolically enacted by the three-day harvest celebration in 1621 between the Pilgrim settlers of Plymouth Colony and ninety Wampanoag, an event briefly mentioned in the histories written by Plymouth governors William Bradford and Edward Winslow.

This First Thanksgiving has been widely promoted since the late nineteenth century as a source of national origins. The types of public events during Thanksgiving have changed over time and have included church services, shooting matches, and—in nineteenth-century cities—military parades, masquerades, child begging, and charity banquets. Persisting public activities include games between football rivals (beginning in 1876) and spectacular commercially sponsored parades, such as the Macy's parade in New York City starting in 1924. President Franklin Delano Roosevelt changed the traditional observance from the last to the penultimate Thursday in 1939 (a year when November had five Thursdays) to extend the holiday shopping season. The controversy surrounding the alteration, however, led to a congressional resolution in 1941 that fixed the official holiday as the fourth Thursday in November. The heavy volume of travel over the four-day weekend originated in the nineteenth-century tradition of homecoming, when urban residents returned to celebrate their rural roots and feast on native foods such as turkey (which is such a central symbol that the holiday is sometimes called Turkey Day).